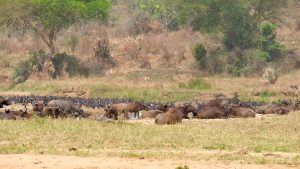 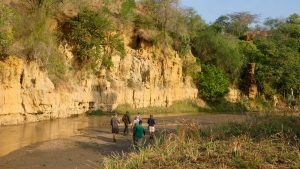 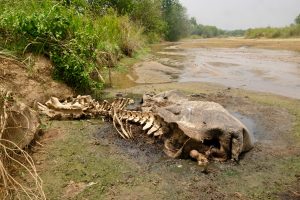 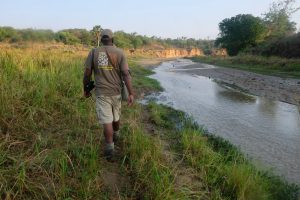 Looking for a big five? 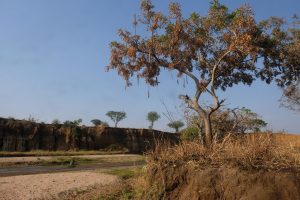 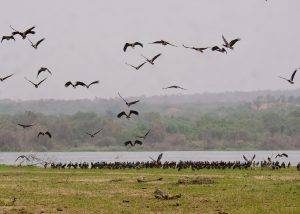 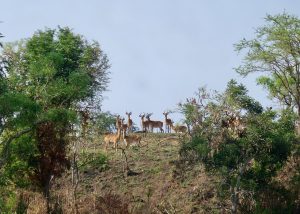 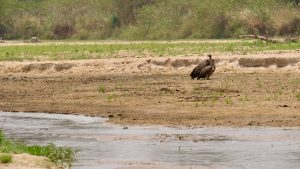 Meeting the boat at the River 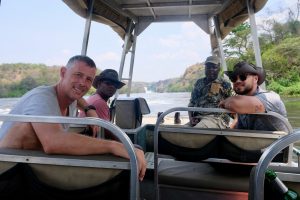 We have explored the Nyamsika River bed up and down several times over the past year and a half. The question in my head very early on was: Can we walk all the way to the Nile one day?

First, I had asked George and Benjamin, our reliable UWA rangers, to explore the route. One day they rode up to the mouth of the river and walked upstream – all smooth and doable; with the highlight being meeting a small pack of hyenas. Within a few months we decided to go the other way starting from Pendero Woodland.

We went on a trip in the middle of the dry season past Feb, and decided to test a new campsite location at the edge of Pendero Woodland. The site is perfect for camping as the rare woodland in this part of the park offers more protection from sun and rain. The view down the valley is magnificent and the area is frequented by elephants moving up and down. One morning we took a short walk along the woodland toward one gorge and found even a trouppe of gregarious Black Colobus Monkeys nearby.

George and I set off toward the Nile early morning and knew the walk will be long: since we were not here first time with no other visitors, we were determined to be fast. The walk to Nyamsika Cliffs indeed went fast, as we were there within 1.5 hrs.

We have seen lots of wildlife around this time of the year being very dry. Mainly waterbucks and warthogs: I stopped counting as we’ve seen maybe 80-100 each? Several groups of elephants in the distance. The highlight was a wide open place by the river with easy access, where we came upon perhaps 200-300 strong buffalo herd: probably the biggest one I’ve seen in the park. They noisily ran off after watching us for a while.

The river area new to me closer to the Nile was equally stunning, with several other magnificent massive rock bluffs. As we came closer to the Nile, the terrain became flatter with more riverine vegetation. It was somewhat deceiving too as the riverbed was approaching the Nile at an angle: we could “feel” we are near the Nile, yet it still took us about 45 min of meandering to finally reach it.

It feels very riverine approaching the Nile with big flocks of African Skimmers, a croc lying on the shore, and the hippos’ grunts welcoming us. Even one elephant decided to come for a drink nearby. The boat was on the way to pick us and soon we headed downstream relaxing. We hiked for about six hours (12 km) which is little too long for a casual trip with visitors, but indeed this walk was worth it.

Two weeks later, this time we took off with a group of five friends to test this last part of our itinerary. We started off at Nyamsika Viewpoint, making the walk shorter (about 4.5 hours). The nature always continues to amaze me: it was still dry season when we arrived to the park, but 1-2 strong rains blew through the area, including one storm playing with our camp gazebo in the air for a while the night before.

The change was immediately noticeable: while we’ve seen lots of wildlife (mainly kobs, giraffe, hartebeest, elephants), gone were the numerous warthogs and waterbucks. Animals moved away as now some water was available away from the river. The wide open “buffalo area” this time had only few antelopes, and a nice groups of elephants was strolling along the other bank while we enjoyed our hearty breakfast.  End of the walk again played with people’s minds, as all thought we were just there, so seeing the Nile brought lots of joy.

This was a fantastic day: we hopped on a private comfortable boat arrived with cold drinks and zoomed up the river to see the Murchison Falls, following the trip to see the falls “from the top”. This combo makes it an ideal all day adventure: we returned to the camp around 5-6 pm; rested and ate another dinner under the stars.