Walking in the bush for months, weeks, or at least a week. How does this sound? Alluring, exciting, thrilling, tiresome or a little bit scary?

Original “safaris” were conducted on foot: up until 1930s or 1940s (or later….) moving around most of African bush on four wheels was pretty much impossible. That was the by-gone era of “white hunters”, documented in books such as Wandering of an Elephant Hunter. The tradition of walking though persisted, and the walking safaris seen their ascent in countries like Zambia since the 1950s due to pioneers such as Norman Carr.

Zambia, indeed is one of the best places to try this super enriching activity out: the country has a long tradition, great operators, and great landscapes. Having worked in Liuwa Plain some years back, I did my share of walking there but never fulfilled my plan of walking the park from across…. Also, I’ve done short walks for 2-3 hours in many parks, but the real multi-day walking is reserved to a very few parks.

What do I mean by mobile walking safari? In short, it is a trip where a mobile camp is moved from place to place every day over the course of the trip (usually 3-6 days) by a vehicle. The participants walk between these locations, so one covers a longer distance experiencing a variety of habitats and wildlife. This is mostly done in the dry season as walking in the wet could be both dangerous (grass very high) and difficult (flooded or wet terrain).

So I arrived excited in Mfuwe, gateway to South Luangwa National Park, one evening: probably my tenth visit in the area, but now I was on a different mission. My itinerary was simple – 3 days walk in the bush. My guide for this trip was renowned Robin Pope Safaris.

The trip first involved one night in the superb Nkwali Camp with some luxury (which I usually do not indulge on my trips, but there was no other option). Though I always enjoy observing little details about each camp: this one had great open-air baths – with showerheads made of dead-tree branches/trunks!

During a walking safari, one wakes up before sunrise every morning (= here early around 5:15 am). It feels little tiring but also you can feel that the nature is waking up about the same time – cool air in June feels great and soon the first light and lots bird calling. Breakfast in Luangwa riverbed was the perfect setting.

We set off walking with our guide Bertram and an armed ranger escort. One walks at a fairly leisurely pace for about 3-4 hours, only about 8-10 km is covered (5-7 miles). Most of the walk is in the open terrain just loosely following animal tracks – the bush is usually very clear this time of the year. We stopped that morning in several interesting spots, most notable a lagoon withe plenty of waterbirds.

After a while, I immersed myself fully in the environment – bird calls, baboon shrieks, puku calls, vultures circling the sky, and many others. There is always something that attracts your attention, whether it is small or big. It could be a dung beetle rolling its “dung”, fresh lion footprints in the soft ground, and/or even stumbling upon an occasional kill: we did not chase the “big stuff” but observed anything that revealed itself. Walking in the bush is sort of an antidote of driving – you need to be and are present with all your senses. And one always walks away from the big game such as elephants and buffaloes. [P.S. I could fathom even more fully immersive experience if one would walk without a ranger and the guide :-), but that it is fortunately for obvious risks not possible or advisable.]

The walk ends in mid-morning around 10:30 am or so. You might think – what to do the rest of the day? The schedule turned out to be perfect and I loved it. The walks ends in a fully set up camp so upon arrival it is time for a welcome drink: be it tea, a glass of chilled white wine, or plenty of other choices. Bush shower awaits and it feels refreshing, followed by a delicious brunch.

I did not waste an opportunity to take a nice afternoon nap, ready and fresh to go on a short walk every afternoon.

The afternoon walk was a much shorter 1-2 hour walk in the vicinity of the mobile camp, which ended with a sundowner in a nice spot on the river.

Every day then felt very active yet not tiring or strenuous, and there was always plenty of new to learn. This educational aspect of walking safaris is invaluable in my opinion, as it lets one truly get to understand the savannah ecosystem and learn about its ebbs and tides. Game drives, unless the guide is exceptional and knows you, tend to be always more of the same as for what one learns.

There were plenty of beautiful moments during our trip:

One afternoon we explored a fantastic breeding site of yellow-billed storks. Roaming around the bush, I’ve seen many of them over the years yet did not know they would get together in such large numbers to breed. The site was simply stunning. 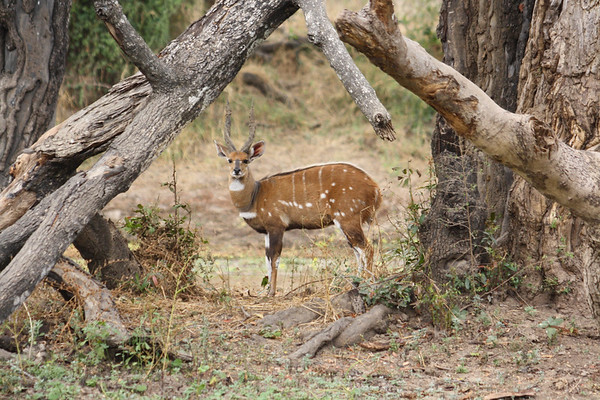 A male bushbuck, usually a very shy antelope stood still and posed for us during the first morning.

Another afternoon, while walking in the riverbed, a sudden puku call and rustling on the bank meant a  leopard kill. We quickly inspected the site and were not alone: the hyenas emerged “from nowhere” within few minutes to see if they can steal some this bounty.

After three days of such “all natural” 🙂 moments, we had arrived to Nsefu Camp. I took a fairly short 3-day trip but some visitors opt even for longer six days walks: based on my experience I would not even mind two weeks!

While having another perfect lunch, the elephants made my day when several herds decided to cross the river and play in the water/mud. Enjoy the trip gallery below also in full screen available here: